The United States and Tuscany represent two realities which are geographically distant but which are united as a free, prosperous and dynamic civilization. These strong and irreversible ties between Tuscany and the United States which over time have been consolidated are reflected in the ten years of activity of this Association, ties which in the future we will be committed to developing further. 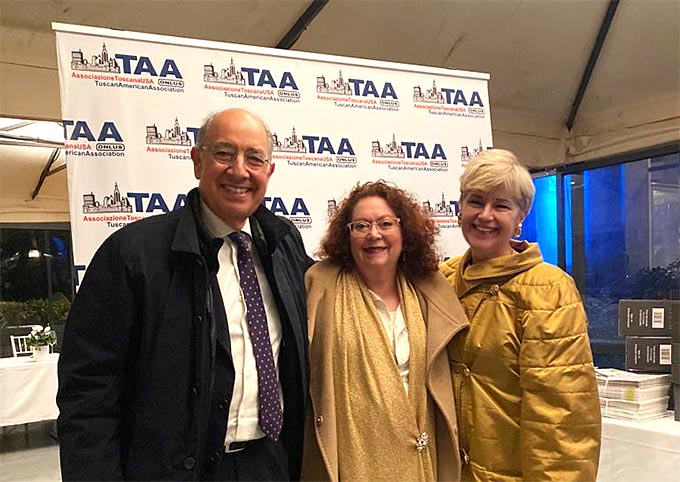 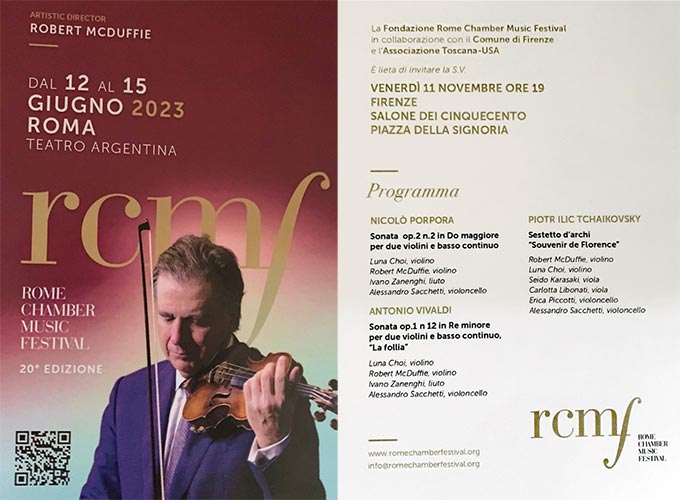 On Friday, November 11st at 7.00 pm the concert of the great US violinist Robert McDuffie took place in the Salone dei Cinquecento in Palazzo Vecchio, accompanied by some young musicians of international level. The special evening in Florence concluded the 2022 Edition of the Rome Chamber Music Festival. 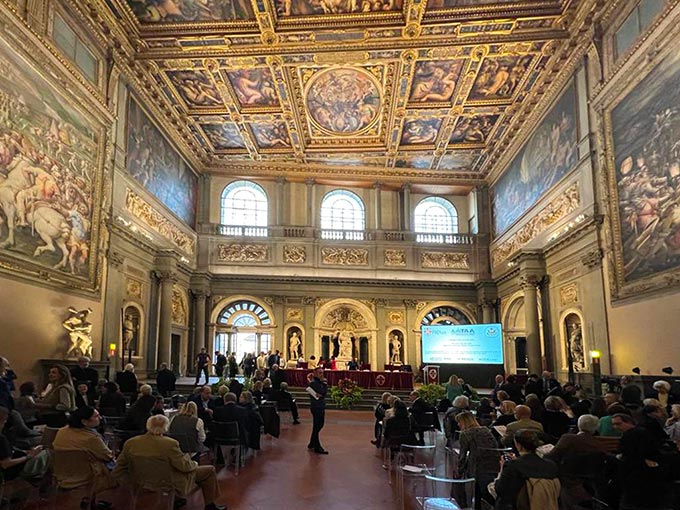 The traditional U.S.A. TUSCAN AWARD CEREMONY 2022. took place on Thursday 20 October 2022 at the Salone dei Cinquecento in Palazzo Vecchio, chaired by the Presidents Maurizio Mancianti and Andrea L. Davis with the participation of the Vice Mayor of the Municipality of Florence Alessia Bettini and the Consul General of the United States in Florence Ragini Gupta. 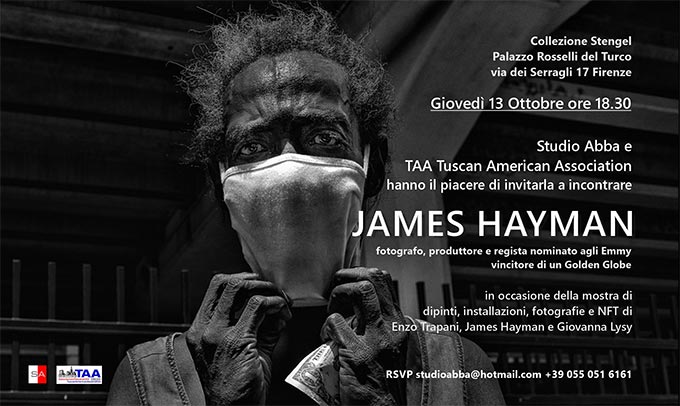 On October 13, the Tuscan American Association, in collaboration with Studio Abba, met at the Palazzo Rosselli del Turco in Via dei Serragli 14, the Photographer James Hayman, producer and director nominated twice for an Emmy and winner of a Golden Globe.

ENZO TRAPANI “The Pill on the wall” 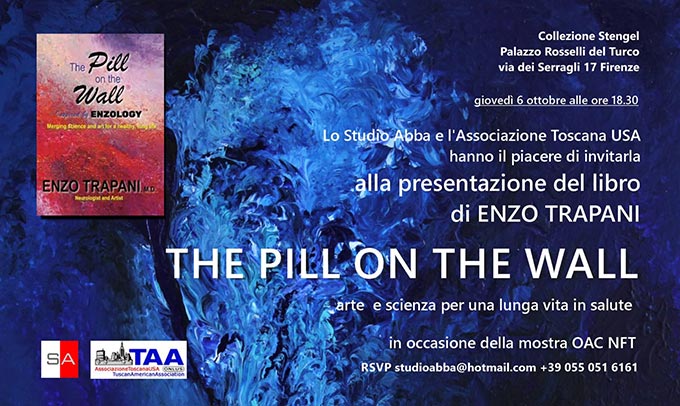 After the summer break, October 6th, Tuscan American Association resumes the collaboration with Studio Abba and the Stengel Collection at the historic Palazzo Rosselli Del Turco, where TAA has a special relationship due to the many artistic initiatives organized together with Vito Abba that have primarily involved American artists. The Palazzo was also the building where the US Embassy was housed during the period that Florence was the capital of Italy (1865-1871).
The first initiative will be presented the book of Enzo Trapani “The Pill On The Wall” on the occasion of the OAC NFT exhibit

Ceremony in honor of Msgr. Napoleone Toccafondi, Parish Priest of Lizzano and Signana, and Msgr.John Murphy, Chaplain at the White House 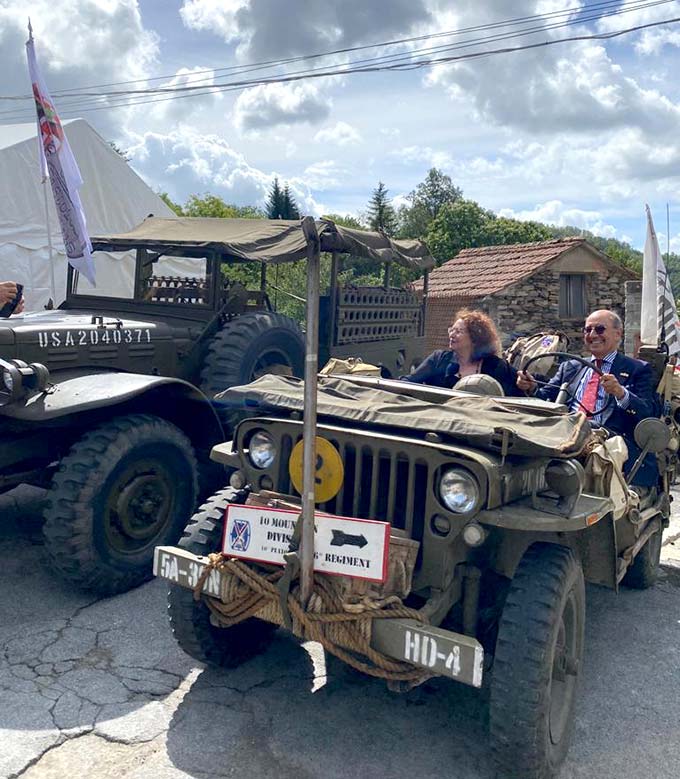 September 10, 2022 a cerimony has been held in the church of Lizzano in the Municipality of Lizzano Pistoiese by the Bishop of Pistoia Msgr. Fausto Tardelli and by the Parish Priest Don Adam Taiszewski in honor of Msgr. Napoleone Toccafondi, Parish Priest of Lizzano and Signana, and Msgr. John Murphy, Chaplain at the White House a Holy Mass. The Holy Mass has been followed by speeches of the Authorities who will be present, the blessing of a memorial plaque and the naming of a street in the town. 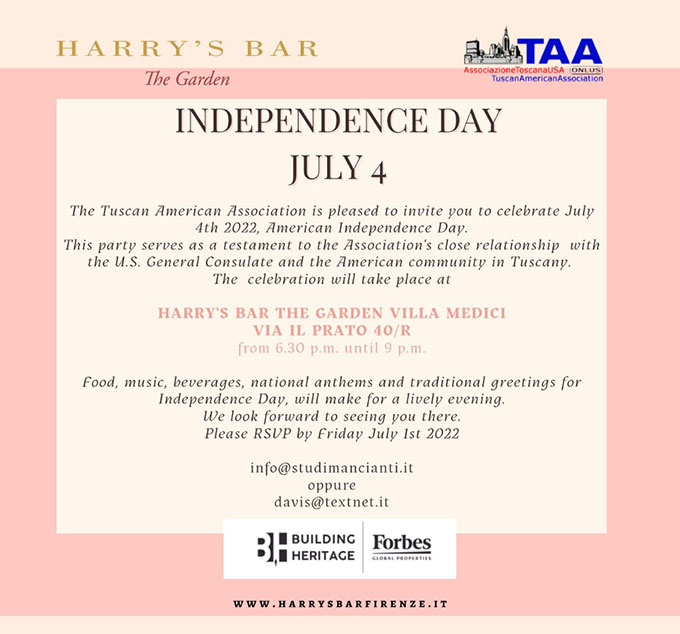 On July 4, 2022, the American Independence Day was celebrated at Harry's Bar Garden Villa Medici in the presence of the American Consul in Florence Mrs. Ragini Gupta and numerous local Authorities, testifying to the close relationship with the Association to the US Consulate and to the entire American Community present throughout the Tuscan territory.

The creation of opportunities for Tuscans and Americans to expand and extend their familiarity with one another’s world and to intensify and enrich their ties of friendship and mutual understanding through the promotion of cultural social and educational exchanges between Tuscany and the United States of America. This is the mission which our Association will continue to pursue together with Tuscans, Americans, the U.S. Consulate General in Florence, the Region of Tuscany and other Tuscan and American institutions. Founded in 1995, the Tuscan American Association has since promoted and organized various cultural and celebrative events which enhance the friendship between Tuscany and United States.

Since 1996, the Tuscan American Association has offered traditional annual events in recognition of the close ties between Tuscany and the United States: