The day May 12, 2016 was held in the Medici villa of Poggio a Caiano the conference headquarters of Filippo Mazzei on the occasion of the celebrations for the second centenary of his death. The cooPresident the association is portrayed during his speech in Leonex room. 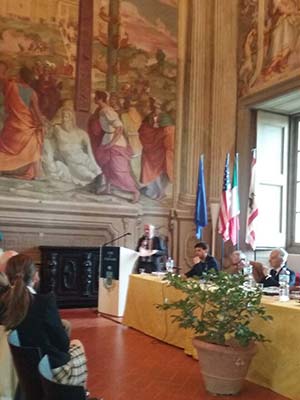 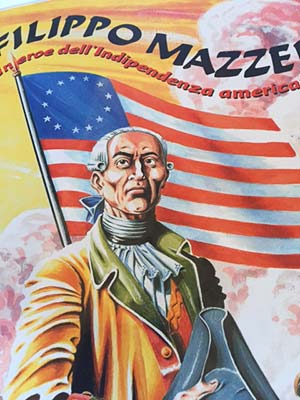 Visit in Florence of Craig Holman 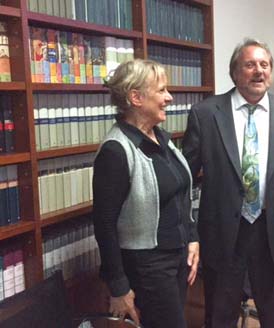 Recently Craig Holman has visited Florence. Currently Government affairs lobbyst for Public Citizen, he gave a lecture on lobbying system in US last May 11, 2016.

Here it is portrayed in a break with some members of the TAA at the offices of Corriere Fiorentino.

Feast of the exchange of Christmas greetings 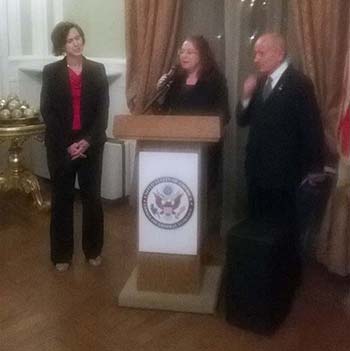 Once again this year in December there was the feast of the exchange of greetings with the presence of Consul January Abigail Rupp, Co-Presidents of the TAA, and Eugenio Giani, President of the Regional Council of Tuscany and the Florence Deputy Major Cristina Giachi. 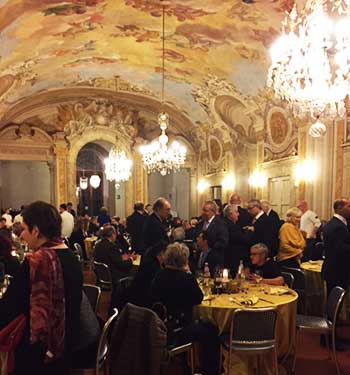 November 26th 2015, the date of Thanksgiving Day, the TAA has organized at the Medici villa of Poggio Imperiale a traditional dinner with the classic stuffed turkey as the main dish.

At the gala dinner was attended by about 150 guests, as we can see in the photo of the living room during the presentation of stuffed turkey roast, star gourmet Thanksgiving according to the American tradition. 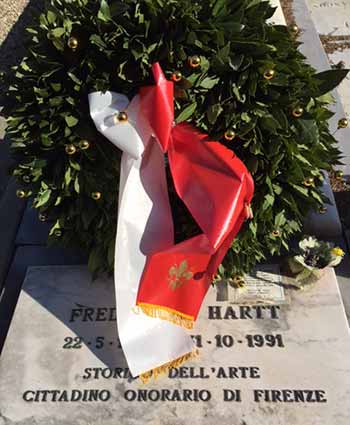 On October 31 we celebrate the anniversary of the death of Frederick Hartt, one of the monuments men who saved the works of art in Florence.

At the cemetery of the Porte Sante the co-chairs of the TAA with the President of the Culture of the municipality and the superior of the community of San Miniato lay a wreath on the grave of Hartt.

On October 13th at the Palazzo Vecchio in the Salone dei Cinquescento will be the customary WELCOME DAY, the welcome ceremony for students of American Universities present in Florence. The Welcome Day 2015 is characterized as an authentic Tuscan welcome to the community of American students, who will be for a few months real citizens of Florence.

The co-presidents of the Tuscan American Association ONLUS, Andrea Davis and Federico Frediani, are pleased to invite you to the Welcome Day ceremony organized for American students who initiate their studies in the various universities located in Tuscany, which will be held Tuesday, October 13 at 5:00 pm in the Salone dei 500 of Palazzo Vecchio. Among the Association’s main objectives is enhancing cultural exchanges between Tuscany and the United States, and the ceremony is among the events that are organized each year with much success.  Opening remarks will be made by the Mayor of Florence Dario Nardella, the Consul General  of the United States of America in Florence Ms. Abigail M. Rupp, as well as by the two Co-Presidents. A dance performance will be offered by the Florence Dance Company under the artistic direction of Keith Ferrone and Marga Nativo.

This will be followed by the ceremony for the Tuscan American Award, given each year on the occasion of Welcome Day to two award recipients, one Tuscan and the other American, who have contributed significantly to further develop the ties of friendship and exchange between the United States and Tuscany. This year’s award recipients are Marco Carrai, President of Toscana Aeroporti SpA,  above all for the work done to reinforce the  local airport system, which is not only strengthening travel between Tuscany and the United States but the entire local economy as well, and Joseph S. Sheppard, an American artist, for his contribution as a sculptor and painter residing in Pietrasanta in creating a bridge between the artistic worlds of Tuscany and the United States, among others by numerous works in both places. A special award will be given to the Biagiotti Progetto Arte Foundation of Carole and Caterina Biagiotti, for its work promoting young emerging artists and contemporary art in Florence and in the United States.

Following will be remarks by Sandro Mencucci, Executive Managing Director of ACF Fiorentina, who will introduce the new Serie A female soccer team (“Fiorentina Women’s Football Club”),  and a closing number of the Florence Dance Company.

On June 17 was inaugurated at the Siena Art Gallery the painting exhibition entitled "The forms of the spirit" of our friend and partner Anna di Volo. Several prominent guests were present including the new superintendent at the Regional Museum Centre Dr. Casciu.

The exhibition, organized with the support of the Tuscan American Association Onlus, will be open from June 17 to August 23, 2015.

In the pictures depicts the TAA presidents Andrea Davis and Federico Frediani, in addition to Fabio Vanni with the artist Anna di Volo.