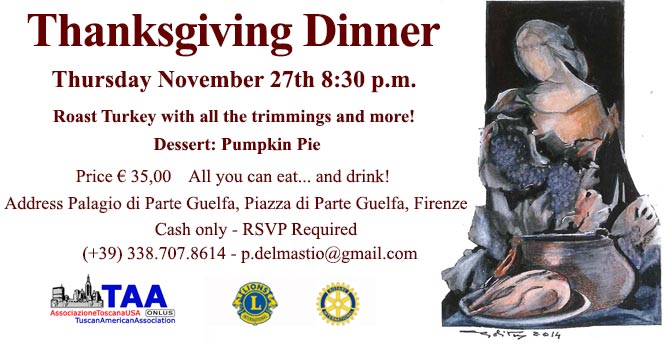 On October 8th at the Palazzo Vecchio in the Salone dei CCinquescento will be the customary WELCOME DAY, the welcome ceremony for students of American Universities present in Florence.

The Welcome Day 2014 is characterized as an authentic Tuscan welcome to the community of American students, who will be for a few months real citizens of Florence.

The Tuscan American Association, the Osservatorio Mestieri d'Arte, the GenerazioniContatti Onlus - through its campaign Beviconlatesta - and the Mercato Centrale, are the organizers of the event, which will be held starting at 17.30 in the Salone dei Cinquecento with the welcome address by the Mayor of Florence and the Ambassador of the United States of America, with the delivery of the Prize "Tuscany-USA 2014". The event will go to 18.30 in Sala d'Arme, with a presentation of arts and crafts workshops LWA with the Atelier degli Artigianelli. At 19:30, into the Mercato Centrale, followed by a tasting of local products.

Greetings to our friend US Consul Sarah Morrison 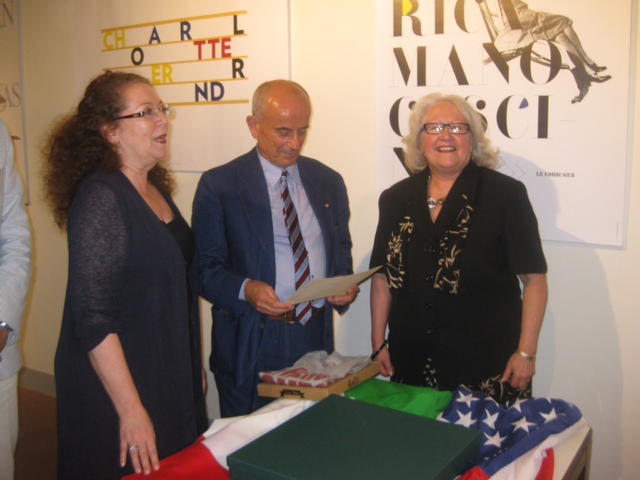 During the presentation ceremony of the book "Firenze sotto tiro" by F. Hartt on the liberation of the City, on June 26 the members have greeted Sarah Morrison leaving Florence ceasing the functions of the U.S. Consul General.

The Co-Chairs have donated to Sarah a painting of Anna di Volo and a t-shirt with the words FLORENCE LOVES YOU.

On October 9, at the Palazzo Vecchio in the hall of Cinquecento will be the usual WELCOME DAY, the welcome ceremony for students of American Universities present in Florence.

The Welcome Day 2013 will be characterized as an authentic Tuscan welcome to the community of American students, who will be for a few months real citizens of Florence.

The Tuscan Association-USA, the Observatory for arts and crafts and the non-profit organization GenerazioniContatti - through his campaign Beviconlatesta - are the organizers of the event, which will take place starting from 17.30 in the Salone dei Cinquecento with the welcome of the Mayor of Florence and the Consul General of the United States of America and with the delivery of the Prize "Tuscany-USA 2013," and will continue to 18.30 in the Sala d'Arme, with a celebration of culture, of crafts and food of Tuscany. 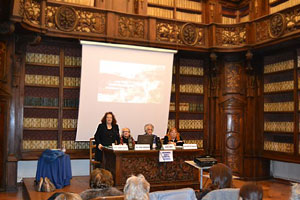 Friday, February 22 2013, the Professional Women’s Committee of the Tuscan American Association, with the patronage of the Consulate General of the United States of America – Florence, Italy, held a conference in the prestigious and welcoming Sala Ferri of the Gabinetto Vieusseux at Palazzo Strozzi, dedicated to professional women and businesswomen called: “Courage and the Challenge for Women in the XXI Century: war, business, professions, love”.  Andrea Davis, Esq., chaired the conference, which was opened by Dott.ssa Cristina Giachi, Councilwoman for the City of Florence, responsible for Equal Opportunity. The Consul General of the United State of America in Florence Ms. Sarah Morrison was the guest of honor and a speaker, who spoke with much emotion of examples of emerging empowerment, using the women in Liberia and Afghanistan as examples. Dott.ssa Giovanna di Bartolo, psychotherapist and honorary judge at the Court of Appeals of Florence, spoke of violence in couples and the “pathology” of misunderstood love, and the president of the Tuscan Delegation of AIDDA (an association for businesswomen and female corporate managers), Dott.ssa Marta Ghezzi, spoke of her personal experience as a corporate president. 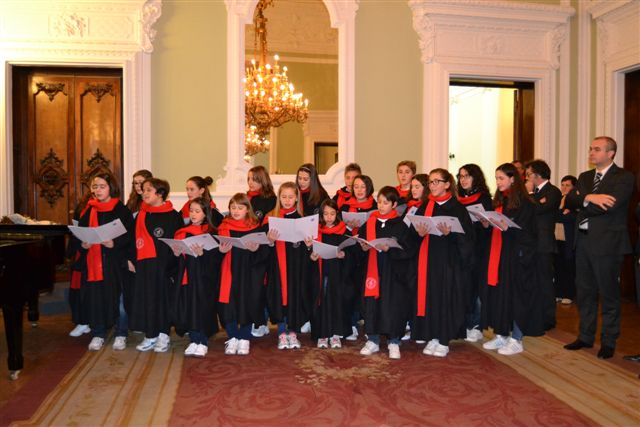 Feast of wishes held at the U.S. Consulate December 12, 2012 in the presence of the Consul General, Mrs. Morrison, the two coopresidenti the TAA Federico Frediani and Andrea Davis, as well as the mayors of the towns of Greve, Scandicci, San Casciano and Pontassieve.
The members of the Tuscan American Association were entertained by the children's choir of the Florentine hills, and have a cocktail tasting and typical products of the Chianti Area. 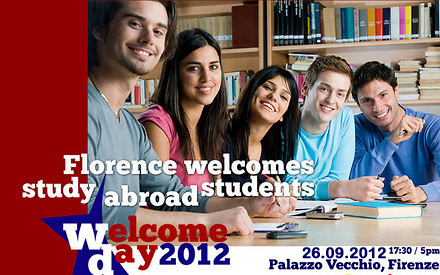 The Welcome Day celebration is our signature event for the students of the U.S. Institutions here in Florence. The lead up is Open Day, in which the U.S.-based universities open their doors to the public for two days on September 24 and 25.
Organized months in advance, Welcome Day will be held on September 26 at 5:30pm in the Salone de' Cinquecento. An important part of Welcome Day is the formal greetings by the U.S. Consul and the major of Florence. It is a formal welcome on behalf of the City and an important acknowledgement of the American students studying here.